One of the most unique iterations of the heralded Boden lineup, the original Boden Masvidalien Cosmo Edition quickly became a favorite amongst not only Cynic and Paul Masvidal fans, but guitar players who sought something different which stood out from the crowd – both aesthetically and sonically. The Masvidalien NX 6 Cosmo retains all of the great features of the Masvidalien Cosmo while adding the new NX features to provide the latest in .strandberg* innovations. The Masvidalien NX 6 Cosmo features chambered Swamp Ash body with a Maple top for a superbly balanced and punchy sound and an open pore Poplar Burl veneer top for a dramatic and unique finish, quartersawn Maple neck with Richlite fretboard accented with his trademark Masvidalien inlay across the fretboard. The new .strandberg* EGS Rev 7 hardware, new neck-heel and arm bevel carves, and Venture Gig Bag round out the updates which increase the instrument’s functionality, playing comfort, and overall value.

What makes it special?

Paul challenged us to come up with a guitar that sounded better than anything else he had played, and this goal was achieved by a single EMG 57 bridge pickup and an active EMG VMC tone control which provide a broad array of great sounds while retaining a minimalistic look that Paul sought.

What does it do?

The Masvidalien NX 6 Cosmo has all of the acclaimed features of the .strandberg* Boden but adds some unique features of its own such as the single EMG 57 bridge pickup with EMG VMC active tone control, the signature inlay on the Richlite fretboard, and the Poplar Burl veneer top with Trans Gray Burst finish that Paul appropriately described as “cosmo”.

Who is it for? 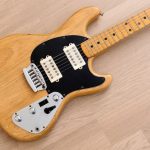