I’m selling a ton of gear with the focus on fewer better items.  I’m using the funds to purchase a Mirabella guitar as I’m mainly a modern jazz player.  I’m not a collector so my philosophy is that if it’s not been used in the studio in the last year, it goes.  I’m only interested in selling and no trades. Also, these are also listed in Australia locally as well.

Ok most people are clueless about these guitars and I see a ton of inaccurate info on the forums. If you think anything I’m saying is inaccurate on this guitar, email Dean Zelnisky himself. Here are the real specs. I’m the second owner, I bought it from someone in Pennsylvania that literally bought it new and it pretty much lived in its case under a bed. I’ve used the guitar for blues sessions and home studio recordings in a smoke free environment. This is from 1979 and has the Patent Pending second generation headstock. They made the headstock slightly smaller in late 1978 because they kept breaking. This is version two of the BFH before it got smaller in 1981 and then the dreaded shrimp fork in 1984. Additionally, this has the red side dots because Dean Zelinsky used pickup sticks for the side dots to save on the building fees at the time. More importantly, you can see the “Z” under the trussed cover, The guitar is incredibly rare in this finish with zero cracking on the finish, and impeccable headstock.. The finish is bright and vibrant. Dean Zelinsky copied the specs from a 1976 Ibanez Destroyer because that was the coolest explorer at that time and what Eddie Van Halen played, so the neck is very thick. It’s way different from the models in the 80’s which have that V neck finish which I think is a bit odd feeling. The bridge has some pitting but that’s unavoidable on hardware. This is truly a great playing guitar and collector piece. I simply don’t play it anymore. Let me know if you have any questions. 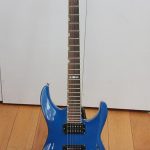 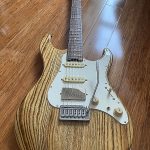 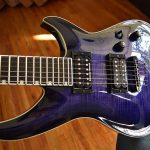